As you're new here, why not read Sam's Welcome for an intro to Lisburn Cathedral?

If you want to come in and experience our beautiful historic building from Tuesday to Saturday, visit the Cathedral Coffee Room.

Click Sunday Services if you want to find out about coming to worship and Visiting Lisburn Cathedral if you want info on parking etc.

If you want to get involved during the week, click What's On to see our calendar of events.

If you want to get in contact with us, please do email us - we'd love to connect with you. You can find out who's who on the staff page.

For inspiration (we hope), you can download podcasts or you can read our blog — we hope you enjoy!

Just a couple of years ago, 13-year-old Derrick was collecting discarded plastic bottles to earn 12p a day on the streets of Kampala.

This week, he was having school lessons and making crafts in Lisburn Cathedral Halls, along with other young members of the Abaana New Life Choir.

The choir is currently on a five month tour of Ireland and the UK and Derrick and the children he is travelling with are walking, talking, singing proof that a little help can really transform lives. 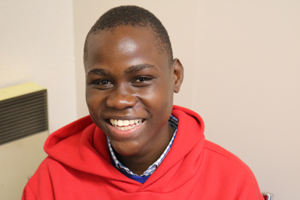 Happy to be singing and dancing in Ireland.

Abaana, meaning ‘children,’ is a charity based in Bangor, Co Down.  It was established by Scott Baxter, its Chief Executive, who was so moved by the poverty and need he encountered on a visit to Africa that he founded a charity giving hope to others, providing communities the opportunity to help solve their own problems.

Education is one of those tools and Abaana has been partnering with local churches and other organisations for 19 years. It has built 13 schools in different parts of Uganda, and runs a number of children’s homes.

The 20 children taking part in this first ever New Life Choir tour all come from Abaana schools and are aged 8-13. 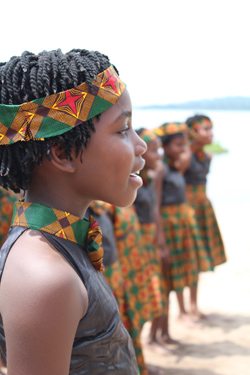 Neville Jones, the charity’s Assistant Director and a parishioner of Lisburn Cathedral, has been involved in organising the tour. He explained that the children are sponsored by people in the UK.  “The children represent their friends and communities and are hoping that through being here they can get more people in their communities sponsored so they can have an education as well,” Neville said.

“This is the first time we have organised a choir tour like this and it is a big undertaking. We wanted representatives from all 13 schools and our sister organisation in Uganda worked with us to identify the singers and drummers.”

The tour is underway and continues until June 4 (concert dates).  The choir will visit Lisburn Cathedral to perform during the parish weekend on March 18, and will also sing in St Mark’s, Ballymacash, on May 31, but there are other dates in other venues within Connor Diocese.

The children are accompanied at all times by 10 chaperones, four who have travelled with them from Uganda. One of the local chaperones is 27-year old Victoria Bell from Lisburn Cathedral, who has taken time out from her job as a teacher to be with the children for the duration of the tour.

The children’s visit to Ireland is causing great excitement among members of Lisburn Cathedral’s youth group Mettle, who sponsor Derrick.

Gareth Campbell, the Cathedral’s youth worker, said: “Three years ago Mettle decided they wanted to sponsor a child through Abaana. All the members now pay in every week, and they also organised a fundraiser, the Sunday Funday Bunday, which raised over £1,000!”

Neville said that when the idea of a New Life Choir tour was first mooted two years ago, he really hoped that the young people from Mettle could get involved.  “Now we can have Derrick standing in front of them and we can say ‘this is the lad whose life you are changing.’”

Derrick’s life has indeed been changed. Due to family difficulties, he ran away from home and walked three days to reach Kampala. He lived for three years on the streets. He collected plastic bottles, earning around 12p a day for his labours, just about enough to by a chapatti (pancake). 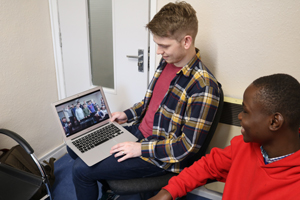 Gareth shows Derrick the video made by members of Mettle.

It was his friends who pointed Derrick in the direction of one of the progammes Abaana runs for street children.

“Some of my friends started to go. They said we could get a place in one of their homes and aunties and uncles will tell us about Jesus. You have to study a little bit too, but they said if you are a good boy you could get into the home.”

Derrick did indeed get a place in a home, and is now in P5 at Abaana’s New Foundations Primary School. He said the first thing that struck him on his arrival in Ireland was how cold is. The people here are ‘very good’, he said, adding ‘I am trying to learn the accent!’

Neville said Abaana works with social services in Uganda to identify young people who would benefit from a place in one of the charity’s homes. Some, he said, would not be interested. The decision to move into a home has to be made by the child.

“When a child beds down on the streets, all they think about is will they get through the night safely, or will they eat the next day. Their horizons don’t extend beyond that,” said Neville.

“We now see boys in the children’s home who are starting to plan for their future. Derrick wants to be a social worker so he can help other children. Cathy, our first sponsored child, graduated with a degree in social science and is now working for Abaana.”

“We are trying to get the message across to people that something relatively small in our terms can do big things in Africa. A little makes a big difference. Sponsorship is literally transforming lives.”

Gareth said the young members of Mettle can see the transformation their sponsorship of Derrick has brought about. They received letters and cards and were very keen to meet with him.”

That meeting took place this week at the Cathedral, which hosted the choir for two nights, but before they met up, Derrick was shown a short video recorded by Mettle in which members welcomed him to Ireland, and said how much they were looking forward to the concert next month.

The New Life Choir tour is aimed at raising awareness of Abaana’s work and bringing in more child sponsors, but Neville said being on a tour like this is potentially life changing for the children involved. 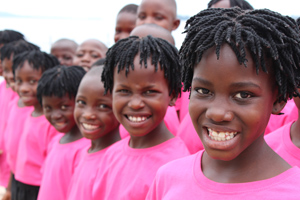 Not only are they singing in front of large crowds – they will sing at the Kingspan Stadium before Ulster Rugby’s match on March 3 – but they have been on planes and boats and buses for the first time ever.

During their time on the road, the choir and its chaperones are hosted by families from the different churches in the places the concerts take place.

Lisburn Cathedral is a big supporter of Abaana, parishioners sponsor at least 20 children in its schools and homes. The Dean of Connor, the Very Rev Sam Wright, rector at Lisburn Cathedral, said. “This is bringing people face to face with the realities of life in Africa in a very real way. Some of the children do live with their families, but the story of Derrick collecting plastic bottles for 12p after having to leave his family really touches people.”

The good news is that Derrick is back in contact with his mother – Abaana’s ultimate goal is to resettle the children who have lived on the streets with a family member.

For information on tickets to see the choir in the Cathedral